21st March: New Moon and a New Beginning:Well, I am sure that like me you are happy that the powerful transitional energies are now behind us. We have passed through the Equinox, and the Solar Eclipse and the New Moon.

Firstly, I just feel that this is a PIVOTAL and very POWERFUL moment. We have passed a critical point or threshold. We are entering a new cycle and new energies. Although this will not be felt fully and completely until August this year, we are already in the "upward" motion of that new cycle.

The New Moon has truly brought us a new beginning. Those of us who have been part of the first two waves of Ascension are now ready to begin manifesting the New Earth and preparing the way for the next two waves that will ascend in the next two years. The pace of ascension will now be much faster, and those who are already across in the New Earth consciousness will help to accelerate the progress of those who are still awakening.

The partial Solar eclipse also brought shifts and changes in the Masculine energy, and we are now ready to work with the power of the Shamanic male energy in the process of creating the new structures of the New Earth. I will be in the Netherlands in April for a series of workshops whose aim is to sow the seeds of these new energies. This will be a partnership between South and North. I will be holding workshops with Jhadten Jewall from Canada, Dionne Hogen from the Netherlands and Ian Henderson, who lives in Holland and is originally from the UK. We will work with ascension, transformation, global networking energies, twin flame unions and the cetacean/human partneship. It promises to be a powerful two weeks for me and Archangel Michael.

So, I think for all of us, the challenge now is to really "walk our talk" and make the shift into New Earth consciousness. We need to take our power and remember who we are. We are powerful creators and it is time to co-create with Spirit, the world that we have dreamed and desired.

As Archangel Michael keeps saying, it is a choice, and a choice we will still need to make every day in this period. We can choose to be in the lower dimensions of fear and chaos, or we can choose to be in the higher dimensions of love and peace. It is always our choice. It takes great courage and strength to make the choice for peace and love, even when those around you make other choices. Remember, we are still living between two worlds, and will do so for a while. It is up to us to keep "tuning" our energy to the New Earth, and not to get caught up in the dramas of the old.

So, allow yourself to feel the new opening. Everyhting is new and open. Everything is ready to be re-created. Everyone knows this on some level. Some are conscious, some are yet to awaken, but on the Collective level we are all moving forward.

The New Humanity is birthed, and the child begins to walk and explore. Allow your soul to adventure and to create whatever you desire. You will learn to manifest that which you desire and you will learn how to hold the peace that will bring great joy to the Earth. Now is the time! NOW!

16th March: Powerful Energies..... Well, just as Archangel Michael said, March has been a month of intense and powerful energies. This is what he said about March:

"Dearest Lightworkers, March will be a month of intense and powerful energy shifts, in which you will complete the integrations of this cycle of evolutionary energies that began in December of 2006. In this month you will experience a Total Lunar Eclipse on the 3rd of March, and a Partial Solar Eclipse on the 19th of March. The Equinox, that important moment of Balance and Recalibration, falls on the 20/21st of March, when the sun moves out of Pisces and into the first house of Aries to begin another cycle.

So, dearest ones, let us speak a little of the powerful energies that are reaching their full integration within you at this time. Firstly, at the Full Moon and Lunar Eclipse, you will fully integrate the energy of the Solar Divine Feminine that was pulsed from the Galactic Center to you through the Sun in December. Then, at the New Moon and the Partial Solar Eclipse, you will experience the rebirthing of your inner Divine Masculine energies in preparation for the Sacred Union of the Divine Feminine and Masculine within. This Inner Balancing will be the focus at the Equinox, and then, many of you will be fully prepared to create the external Twin Flame union as a mirror of the inner process that is completed. You will be fully prepared to experience the states of Grace, Bliss and Joy, that will be the expression of Unconditional Love and Compassion in the New Earth."

I think most of us felt the powerful energy of the Total Lunar eclipse on the 3rd, and the resulting reverberations or waves of energy as the Solar or Fire Goddess sent her power through us as waves of loves from the Compassionate heart of the Source. In this time, many of you have felt very vulnerable as you have opened your hearts to the flood of energy and allowed yourself to center in your heart and be in your heart. At this time too, I have seen many miracles of love and support as people find each other and offer support and love in an unconditional way.

I received these images from Julie Bauer in Australia. Julie reported that the sky was red at sunset even though the sun itself was completely hidden behind the clouds. Many people have reported similar atmospheric effects that are new and startling. Here, in Cape Town, we have had a severe episode of "Red Tide", when the sea becomes red like blood, owing to the presence of bacteria in the water. The Fire Goddess is certainly making her presence felt, but in a fairly gentle way. The Red tide does cause death to small sea creatures like rock fish and starfish, and as I walked along the beach with my friend Jonnie a few days ago, and we saw the dead creatures washed up on the shore, I was reminded of the great eastern Fire Goddess, Kali, who is the Goddess of Life and Death and Endings and Beginnings. A powerful lady indeed!

And here is another "Red Sky" image from another part of the Planet. This was sent to me by Mary Ellis from Italy: 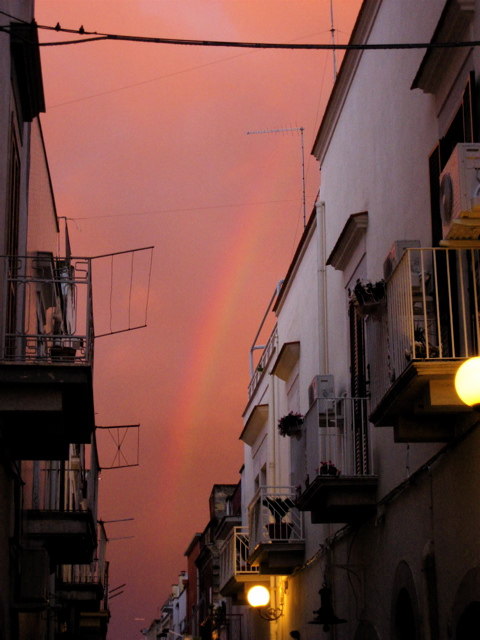 So, now, as we move towards the partial Solar eclipse and the equinox, we are allowing the strong masculine energy of the Water element to integrate within us. This will also be a powerful time, with many strong energy shifts. But again a powerful time and a beautiful time if you allow yourself to center in your Heart and breathe from your Heart and be in your Heart. For the Heart sees all with the eyes of Compassion and Love and Gratitude! Whatever we are passing through now is a process of Love and Compasssion for which we can be deeply grateful and which we can celebrate with these powerful energies. So, between now and the 21st of March, be prepared and expect the unexpected!

Here is an interesting transit for Sunday, from the www.spaceweather.com site: PLUTO OCCULTATION: "On Sunday morning, March 18th, Pluto will pass directly in front of a star in the constellation Sagittarius. This occultation will be visible through large backyard telescopes in the western United States, offering a rare look into Pluto's surprising atmosphere."

Pluto is also very close to the Galactic Center right now, and is one of the prime "engines" of the powerful energies of transformation. I am prepared to guess that there will probably be very powerful surges of energy on the week-end and into Monday as this transit occurs.

This work is licensed under a Creative Commons License.

You are free to copy, distribute, display, and perform the work under the following conditions: You must give the author credit, you may not use this for commercial purposes, and you may not alter, transform or build upon this work. For any reuse or distribution, you must make clear to others the license terms of this work. Any of these conditions can be waived if you get permission from the copyright holder. Any other purpose of use must be granted permission by author.